The 3 Worst Types of Tech Leaders in Start Up 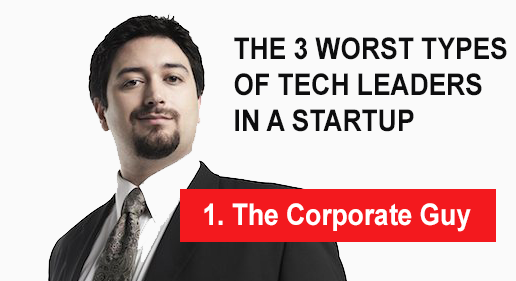 As a consultant tech lead, I'm usually the go-to person when a company has hit the wall. Usually, there are signs of a poor tech leader or co-founder that has stalled tech projects and demoralized their tech team to the point of a mass exodus. Here are 3 of the most common.

No: 1 The Corporate Guy

Either the COO or CTO, the corporate guy has a resume filled with Fortune 500 companies and top consulting firms. IBM, Google, HP... You name it, he's got it. Probably had a senior role as VP operations or some functional position before he decided to re-invent himself joining a startup.

The last time the corporate guy touched code was when windows 8 was around. He has not been to the front line in ages and has lost of connection to the customer. Instead, he relies on what he calls, "empowered delegation", which is another word for corporate work dumping. "Go figure it out yourself" is a favourite catch-phrase.

The corporate guy loves systems. He'll put a system in to manage another system. He chews reports, where he just eyeballs them before sending it to the next person. He also loves all corporate brands. He will subscribe to all the most famous internal brands (Oracle, AWS), not because he uses it, but because he thinks it's stable.

Your startup grinds to a halt. Discussions grind to 'corporate talk'. A bunch of words that mean nothing. There's usually a higher headcount with assistants, executives assistants and someone who grabs your coffee with someone who adds the milk.

Meetings become a version of the apprentice where employees attempt to avoid getting lighting strike and are shutdown with "I'm experienced, I've been at a big company"

What To Look out for

That's because he's 30,000 feet above. But if you do not do something, it will be a hard landing.

Has your project stalled?

Maybe its time you called the Tech Lead.

Posted in Leadership and Management on Sep 22, 2019