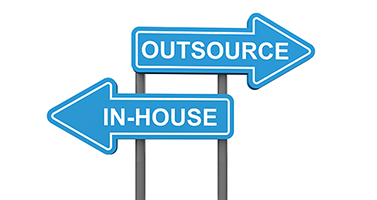 "I've had it!" Staff morale problems, staff work scope problems, and staff personal problems. "Sometimes I'm not sure who's the employee and who's the boss"

That was the day I decided to let my full-time staff go. That was the day, I learnt how to outsource and work with contract teams. We are all a lot happier today.

I'm going to give you 5 reasons why doing it in-house or yourself might be a bad idea.

How can that be? Consultants could be 30-50% higher per hour than full-time staff. Are you sure?

Turns out it is, by a long shot. Full time employees get paid regardless. Day in, day out. On leave, on medical, having coffee, having a smoke break. etc etc. Especially a business where it is cyclical, you'll going to have peaks and troughs. When there's nothing on, these people still get paid!

Contracting out is like Rideshare. You only pay when you use it, which could be very little. A lot cheaper than owning a car yourself where a lot of the cost is fixed.

Full-time employees get invested in the business. They go to lunch with other people in the company. That is a double-edged sword, especially when there's a pivot. Suddenly you find yourself having to manage employee moral. Someone found out someone else got a pay raise ... oh now you got a headache. Group of people feel you are moving out of Node.js back to Ruby core... oh there's going to be grumbling and staff problems for weeks and months.

Once I got called up to the board two to three times because some people below were not happy. You are going to be stuck managing HR instead of getting the job done.

I find contractors are single-tracked. Get the job done and get paid. Everything is professional. They don't ask about stuff and you don't tell them. Works for me.

One reason people think to hire full time is staff loyalty. Turns out, in reality, it is even worse than contracting.

I've seen companies 'Hollowed out' as groups of engineers follow a lead out the door, poached by some bigger company. If a guy is good, he's on the target of every other firm in town and you live in fear that he's going to go and leave you in the middle of a 3-year work pivot plan. Especially in this market. Ouch!

The reverse is even worse! Poor performing staff are almost impossible to get rid off and they are the ones that stick the longest.

Hiring then become a pain with a really tight market. It can take weeks or months. Maybe a few wrong hires. Then there's one or two months teething phrases. This even before any work gets done. Projects stall as staff going through the merry-go-round. I know a startup that for an entire year, they spent most of the time trying to hire, some of the time teething in and the last two months looking for another job! They probably only got 3 months of work done!

With consultants, it is easy. Not doing a good job? Let the partner know. Still not? End it after the contract. Hiring? Don't waste time. Give them a short contract with REAL work, not some test you spent even more time creating.

4. You Can Get A Professional

Nobody has any problems outsourcing to a doctor or lawyer. But somehow companies like to throw the hat to their already paid employees and go "Ok, see if it fits" The poor employee struggles, does a bad job and someone how the company ends up with a duck tap solution. You see employees stretched. UI designer as tech lead? Software engineer as trainer?

By nature as a consultant, we just get very good at doing a few things. We just keep doing it. When I tap my contractors, I have a Ruby guy who just does Ruby and a Yii2 Framework guy who just does Yii2. I just get very good at managing them (ok I can code Yii2 like a Beast as well). Likewise, they don't want to spend their time pitching for work, marketing, and project managing, they want to code and they get really good at it.

Then you can focus on what you are good at or what you like. Do I like doing my annual filing? NO. Could I save some money and do it myself. Probably. But I'm busy doing other stuff so I get JK, my accountant, to do it.

5. You Get Drive and Happiness

I once heard about a software engineer explain after 3 years working in a large startup that he felt there was 'No light at the end of the tunnel.' Sounds pretty bleak.

As a contractor myself, I am able to attract the best contractors because I empathize with them. Some of my team members are so talented they could become CTO's themselves, but people have a lot more in their life than just work. The gaps in between a consultants' schedule lets people take their daughters to school, visit their family in a different country and maybe even take a vacation every 2 months with their minds free and recharged.

So that means when you hire a contractor, you get driven and happy people. (not every contractor is like that) I emphasis the 'happy' because that to me is most important. Life is too short not to be. Today, I work with guys like Firnas and Ardi (above), we make money, get the job done and be and stay happy.

Posted in Leadership and Management on Jun 22, 2019